For a butter knife it was sharp. My grandmother must have had it for a long time. Its blade was truncated by a fracture, rust collecting at the end of its one-inch length, at the site of the break. I was never sure if she kept it because of some sentimental attachment or a deep-seated sense of Soviet scarcity made more acute by the still fresh memories of the deprivations of the Great War, which was only two decades behind her. I was attached to my distorted reflection looking back at me from its heavy silver handle.

She used it for everything: to butter bread, to peel and slice apples, to shred the beef she boiled for my grandfather as he lay ravaged by a stroke, immobile, mute on the bed in the living room that smelled of coarse lye soap. She fed him tiny bites from her own hands, and he swallowed compliantly. Unable to coordinate chewing, sometimes he choked, and she would jump out of her chair to slap him between his shoulder blades, a ritual my mother still performs when my children swallow carelessly, despite my insistence that a) it’s an ineffective way to treat choking, and b) you only need to worry if they cannot cough. But she never accepted some of these newfangled medical ideas. Or inaction.

The knife seemed never to leave my grandmother’s hands. She would sit in the kitchen talking with my mother, slicing a block of doktorskaya*, lining buttered bread with the thin rectangular pieces of meat, and berating my mother for marrying a rag of a man who could not stand up to his own mother. My eyes would follow the sun’s reflection from the handle as she deftly moved the knife around the plate, until the grown-ups noticed and shooed me out of the kitchen, so they could continue their grown-up conversations.

She would have brought it with her when we emigrated in 1976, if it hadn’t disappeared one day, five years earlier, when I was nine. Or maybe I just stopped noticing it after that gathering at our communal flat.

People poured in on a weeknight. Unusual, I thought. Then there were the looks, men and women towering over me, glancing at each other as they slid their thumbs down my cheek or held my chin briefly, making searching eye contact, walking away sighing. There were whispers and vodka and sliced salami with pickle wedges, and deviled eggs and potato salad, and pickled herring, all on a starched and ironed table cloth, all prepared by my mother in the dead of night after work and before I suspected anything. I stood there, frozen, knowing that I wasn’t supposed to know, knowing what they all knew, but still having the option to lie to myself because no one had actually told me.

What happened to that knife? Did she bury it with my grandfather? Did she fling it out the window, outraged that he could just give up like that, leave her? When he got sick, she made him her life. Now he was dead. Who needed a knife?

I ask my mother why they didn’t tell me. She says it was a mistake and looks away. I smile a tipsy smile, because I cannot ask this question sober. And we just sit there, she and I, in my kitchen, with the silverware glistening between us in its steel tub on the tabletop.

The silence will not last long. I can count on her to break it.

*A type of bologna more regularly available in the Soviet food stores of the Brezhnev era than any other deli meat. 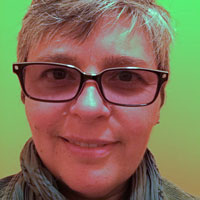 Marya Zilberberg came to the US at fourteen from what was then the Soviet Union. She now lives in Western Massachusetts, where she splits her time between numbers and words, the latter mostly in English. By day she studies the spread of superbugs and ponders conundra in evidence-based medicine. By night, she gives in to her creative impulses. She is the author of the book Between the Lines: Finding the Truth in Medical Literature. Her creative work has appeared or is forthcoming in Six Hens, Meat for Tea: The Valley Review, Vox Poetica, The Blue Hour, and Boston Poetry Magazine, among others. She blogs at Arkadia.