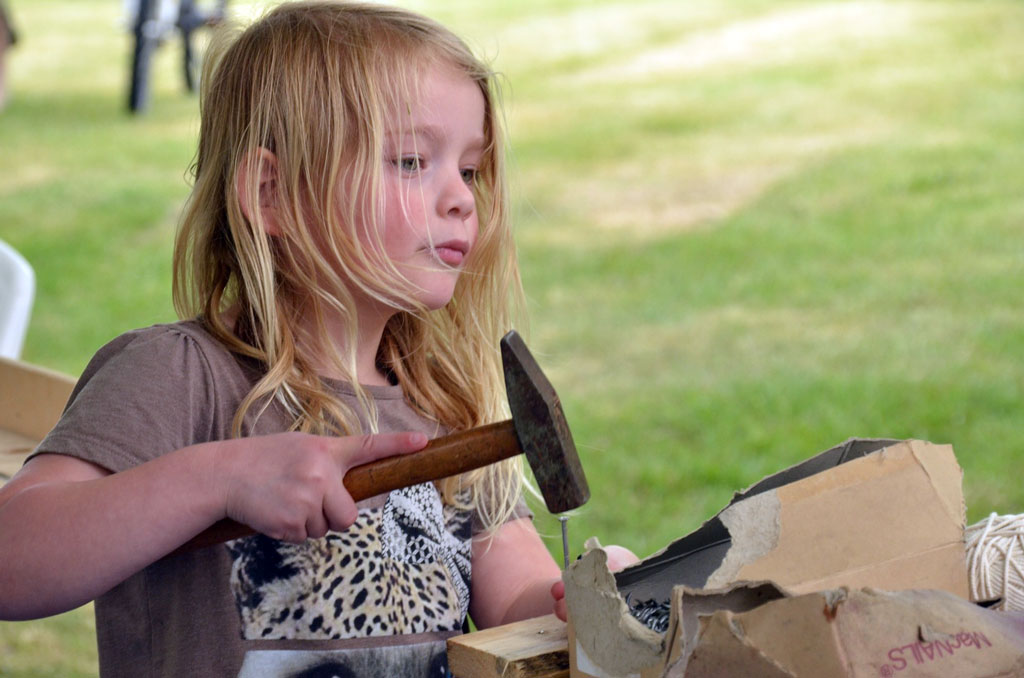 The girl wants to go to the kids’ museum. Since her brother is sick and dad has command central on the couch, dispensing Tylenol and blankets and puke bucket and juice, that leaves me to drive her. I want to shut myself in my office and work on my novel, far from puke and clacking toys, but then she’ll say of her childhood that her mom did nothing but sit in front of her computer all the time. Aren’t her needs supposed to be bigger than mine? I take my journal and magazines along with snacks. I’ll sit on the bench and read. I’ll never be Mom of the Year, but look, my mom never played with me. She considered it her job to feed and clothe me, make me go to school, drive me to appointments, and I turned out just fine.

But the girl doesn’t want to play with the exhibits, she wants to go to the tool shop. This requires a supervising adult and a pair of plastic safety glasses that press my regular glasses into my head in a painful manner, and entails me standing around reminding her to tighten the vise and keep both hands on the saw while a background soundtrack of hammering, the instructions of other parents, and an endless loop of Disney tunes also presses into my head. There’s nothing, in this particular moment, I’d like less.

I ask her what she’s creating.

“A magical make-believe machine that can do anything you want it to,” she says.

Oh good, I can use one of those. How long will this take? There’s no place to sit, and I’m bored. I’ve finished my project, an airplane for the boy, so I ask if she’s nearly done.

“Do you know how long it takes to make a human?” she says.

In fact I do: thirty-eight weeks. Forty weeks counting from last menstrual period, which I don’t know why anyone does since the egg isn’t ripe until two weeks later and you have that narrow window to do something that can never be undone, not ever. Or thirty-seven weeks in her case, same for the boy, both my little over-achievers, pushing their way out early in great gouts of blood.

She ignores me. She’s the authority, seven years old, plastic safety glasses, pink nylon pants I bought for pajamas, the purple spangly shirt that says “Play Like a Girl.” Hair tangled in a cowlick though I brushed it three times. Dirty beat-up sneakers missing half a Velcro strap. She got dressed when I asked so I decided not to fight about what she chose. Her belly sticks out like a full moon and I’m the only one who cares about this; she’s gluing string, silk flowers, plastic hats to her piece of wood and sometimes to her finger. Other parents help their kids, sawing, measuring, offering items to nail and tape. I watch and criticize, the whiny chaperone. I don’t like it, but I don’t know how to make it stop. Stick it to the surface before it sets. That’s too much glue. Aren’t you done yet? I have to pee. You know we have a glue gun at home.

“Yeah, but we don’t have all this stuff.” She slugs another round into the glue gun, picks yards of gooey string off her hands.

Such patience she has. Creating humans. I know how I must sound to the other parents, the ones directing and guiding and gluing for their kids. This creation is her own and she wants it that way. Am I helping her become a scientist, physicist, mathematician, engineer? Am I failing to teach her female grooming habits, the lack of which will cause her no end of agony when she’s thirteen?

She drops her wood pieces and the tape breaks. She swoops in with glue. The flower eyes were my limit; now toothpick eyelashes? We can do this at home, I tell her in the modulated, low-pitched voice of the chastising parent, especially the parent being an a-hole. I know not to say it, yet I hear myself saying it: I didn’t pay to come here to do stuff we can do at home.

What is the matter with me? A dad glances our way, keys and cell phone clipped to belt, gluing the pieces he sawed for his daughter while she wanders around rifling through buckets, bored. Hashtag parenting fail. He hijacked his kid’s project, knowing how to do it better, and I’m killing hers. Both of us trying to keep things between the rails, wishing we had the blueprint for how this turns out.

She’s so focused, those eyes brown as walnuts—the same surprising shine, the intense concentration I remember in her as a baby, or at least remember from the pictures of her as a baby. The times I don’t have photos of are hazier in my mind. Still so chubby, and I worry about that, too. My head hurts and my feet hurt and all of a sudden it’s intolerable right now, standing here with the Disney songs and nothing to do but watch her start on glue stick number three.

“Fine,” she says when I set the limit at four eyes. “I’m done anyways.”

I get to pee, sit, open my journal, take a breath and let my head clear of the smell of glue. I lose sight of her, find her again, climbing the tree house, picking fruit, following a new friend into the toddler house, reading a board book to a baby doll. Then she’s in postal coat and bag, sorting mail, so serious, so intent. At the fire station she pulls on the chief’s hat and too-big jacket, hauls out the hose, puts out the fake fire. I’m watching, but she doesn’t glance over to see this; she’s off to the store to tie on an apron and ring up other kids’ groceries. Her hair’s sticking out every which way again and she makes perfect change every time.

On the bench her creation, thick with glue, stares at me with its strange flower-spiked eyes. She’ll put it on her dresser and forget about it. But she won’t forget my head in a book, nagging I didn’t come here for this. Or if I let her put toothpick eyelashes on her humans. Let her wear the pajama pants. Let her toss her imagination into the air like a weather balloon and stood beside her, watching to see where it lands.

She floats by the bench, leans silken hair to my cheek. I wrap my arms around her and rub her back and, for a moment, she lets me. She’s solid and she smells like cupcake hair spritz and that new, clear, talc-y scent of seven-year-old skin, unscarred. Then she’s off, and I can pocket one moment, one, before she’s eighteen and moves out and doesn’t have to put up with my crap any longer, when I held her, when I told her I liked the thing she made, when I was the mom she deserves. Thirty-seven weeks to create her, no idea what was coming. So much longer for her creating me. 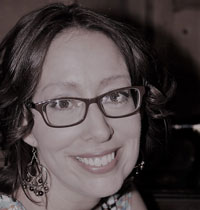 Misty Urban is the author of two short story collections, A Lesson in Manners (Snake Nation Press, 2016) and The Necessaries (Paradisiac Publishing, 2018), and several works of medieval scholarship, including the co-edited essay collection Melusine’s Footprint (Brill, 2017). Her creative nonfiction has appeared in Literary Mama, 3Elements Review, Draft: A Journal of Process, and My Caesarean (The Experiment, 2019). She lives in real life in Muscatine, Iowa, and online at mistyurban.net or femmeliterate.net, a site for literary feminism and women in/and/of books.