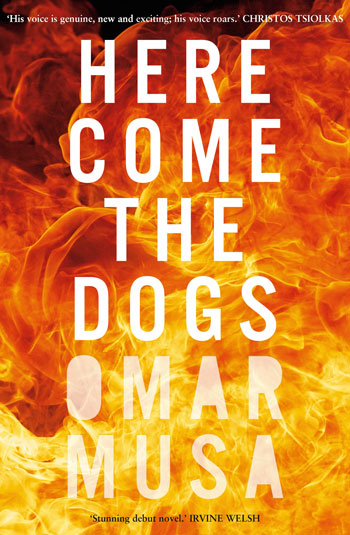 You had to be there. Right? That’s how these things work—the magic of moments strung together, a shared lexicon, the bond of shared origins. Omar Musa’s brilliant first novel Here Come The Dogs unpicks the rough, multifaceted hip-hop culture of small-town Australia. Immediate and compelling, this one deserves a place on the shelf next to Trainspotting or The Electric Kool-Aid Acid Test. Both a snapshot of a specific time and place, and an examination of the broadness of humanity, Here Come The Dogs is filled with stinging insights, delivered in freestyle and lyric prose.

In hip-hop, context is everything. Those who know, know. Inside that world—word battles and swag weed—a man can be a prince if he spits good rhyme. Outside, it’s a different story. The guy dominating the mic last night is waiting to wash your car windows this morning. Who is underneath the shiny props and thick black tattoos?

Solomon, Jimmy, and Aleks—one Samoan, one Macedonian, and one unknown—waste time being cool in small ways. They’re half-assing it, diverting their hustle to greater things in the way that artists do. One has a part-time dishwashing gig, one plays the middle man for the local drug traders. Around them, the world is shrinking into a shape that doesn’t have space for three men like them. “Every fire dies, every story, every star, every town. Every nation? Childhoods are macadamed beneath asphalt and paint rolls, but just for other childhoods to exist. This, the nature of change, of modernity.” The friends struggle at the fringes to keep their fire alive.

It’s a shit life, and they know it, but at the same time, what’s the alternative? Their words make them powerful—turn them into a secret tribe. You had to be there, the rhymes assert. Who’s the outsider? Who doesn’t get it, now? 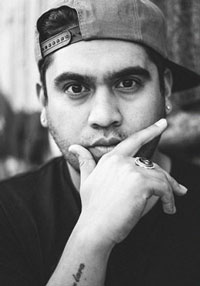 The author, Omar Musa, plays with the same boundaries that vex his characters. Hip-hop’s power is in its ability to dignify struggle, and Musa gives his troublesome three every ounce of respect he can. Perspective is everything, and he puts things in perspective—no talking down, no transforming characters into symbols, no impersonations. Here Come The Dogs takes on race, class, baby’s mamas, dead-end jobs, respecting your parents or telling them to sod off, being the only black man in class, dropping out, tagging the tampon dispenser in the public bathroom, seeking the side door into something better.

This will all sound like familiar territory to hip-hop aficionados—the cadence of Musa’s language, his characters’ friendly-competitive banter—but Musa takes it deeper. The catalyst is a one-eyed racing greyhound named Mercury Fire. On a whim, Solomon buys the dog after its last race. Never mind that he’s crashing with his mother and has nowhere to keep the dog. Never mind feeding it, exercising it. He and his friends are figuring out what they can and can’t maintain. They’re deciding whether to leave Australia or stay; whether to heal the torn places in themselves or go on bleeding. Aleks contends with his wife’s post-partum depression. Jimmy, with his loneliness. Like the racing hound, they’re all losing their edge.

Like him,
I used to run and run,
from here to the stone gazebo
on the edge of the park
and back again, to keep lean …

A pointless struggle,
actors in a strange tragedy
where the winner never wins,
……..never gets its prey.

The language, alternately tender and sharp, goads the story along. Musa is quick to remind us that, although his characters and their suburban landscape may feel familiar, this isn’t an ordinary story. This isn’t what you expected—and neither is the author himself, a Malaysian-Australian rapper and poet with three albums and a TedTalk under his belt. The goodness of this novel is no accident. Each turn of phrase is measured, perfectly describing the cage bars that Solomon bends, a millimeter at a time.

Both foreign and familiar, Here Come the Dogs explores the fine distinctions between thug life, real life, hip-hop, rap, and the game of moving seamlessly between them.