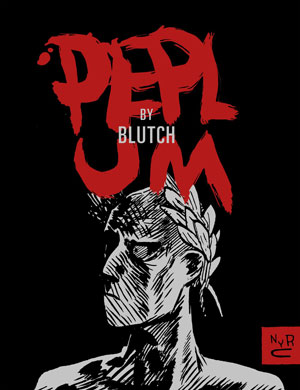 “There is little point in expecting much of your own projects, when fate has projects of her own”
–The Satyricon

“The nostalgia for purity, the ghost of perfect love – these are a drunkard’s despair.”
–Peplum

The French cartoonist Blutch is known for creating beautifully illustrated graphic novels in response to great works of art and literature, and Peplum is one of his finest. The comic is a postmodern refashioning of Petronius’s mid-first century proto-novel The Satyricon, which ditches the original’s gluttonous decadence under Nero’s reign in favor of the chaotic end of the Late Roman Republic.

In many ways The Satyricon is an alien work of literature, composed of lengthy fragments of some sort of mock epic that parodies in extremity social norms which no longer exist: the surviving version ends mid sentence in the middle of a discussion of cannibalism. The difficulty of grasping the meaning of or “propererly” responding to The Satyricon has fueled surreal contemporary interpretations, most notably Fellini’s 1969 “science fiction of the past,” and this same attitude of both estrangement and fascination pervades Peplum.

Blutch’s Satyricon takes place in a Roman Empire of “lean and hungry look[s]” (to borrow from Shakespeare), desperate wretches at the fringes of a schizophrenic nation longing for pleasure in the midst of declining ideals. Peplum is not so much a work of historical fiction as it is a pastiche of classical imagery and signifiers, not unlike the classically-derived pulp film genre alluded to in the title.  Blutch’s work both evokes and confuses masterpieces of antiquity as it explores the sense of beauty and loss we experience in the midst of these ancient achievements.

In Peplum, Blutch’s Enclopius assumes the identity of the exiled patrician Publius Cimber, a name which may be familiar to those who have read Julius Ceasar (those in need of a reminder will benefit from the lengthy quotation of the assassination scene from that play included in the first chapter), after slaying him. As Cimber, Enclopius becomes enamored with a woman frozen in ice, modeled after a Kourai sculpture from Crete currently on display at the Louvre. Protecting, losing, searching for, and recovering the woman repeatedly throughout the text, Enclopius/Cimber stumbles his way through surreal distortions of familiar fragments, failing his young lover Giton and squabbling with the bumbling poet Eumolpus.

The Roman world, which this desperate Enclopius scavenges, is desolate and decaying, filled with leering rogues in grimy spaces aching with malnourishment.  Fittingly, the iconic “Dinner with Trimalchio” story, a satire of a wealthy freedman’s vanity and overindulgence that comprises nearly half of the surviving text of The Satyricon, is completely absent in this version. 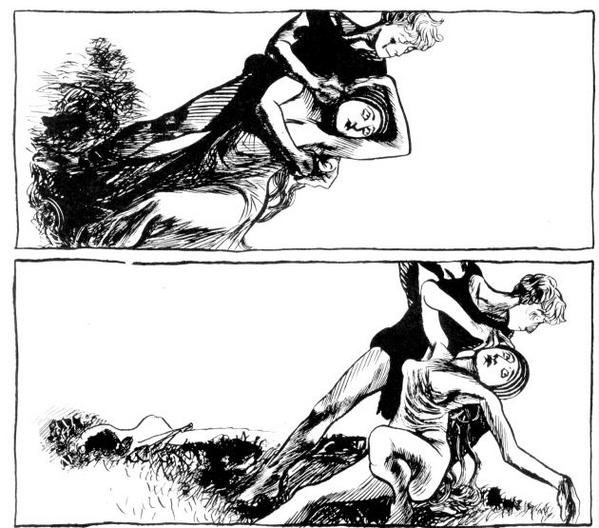 Peplum reads as character-driven fiction, but upon closer scrutiny the work is actually quite similar in approach to Blutch’s later, essayistic graphic narrative So Long, Silver Screen. As in Silver Screen, Blutch works through his artistic obsessions by means of quotation — most of the dialogue in Peplum directly excerpts the original text of The Satyricon, spoken by different characters and in varying contexts. With this in mind, the comic’s presentation is actually quite experimental, page upon page of figures contorted in agony and lust while spewing jokes at each other, each passage less coherent the more its context is considered.

Many of the quotations in Peplum come from one section of The Satyricon, an episode in which Enclopius tries and fails on multiple occasions to successfully ravish the noblewoman Circe, his attempts to cure his impotence escalating to the point of literally shouting insults at his flaccid member. Aside from a few superficial changes, this story is presented relatively faithfully in Peplum, but it is reimagined as tragedy, a traumatic fall from grace at the heart of a story of failure and decrepitude. Enclopius’s comedic inadequacy becomes a symbol of the loss of youth and the fundamental separation from real experiences that an image of sublime beauty seems to point to. 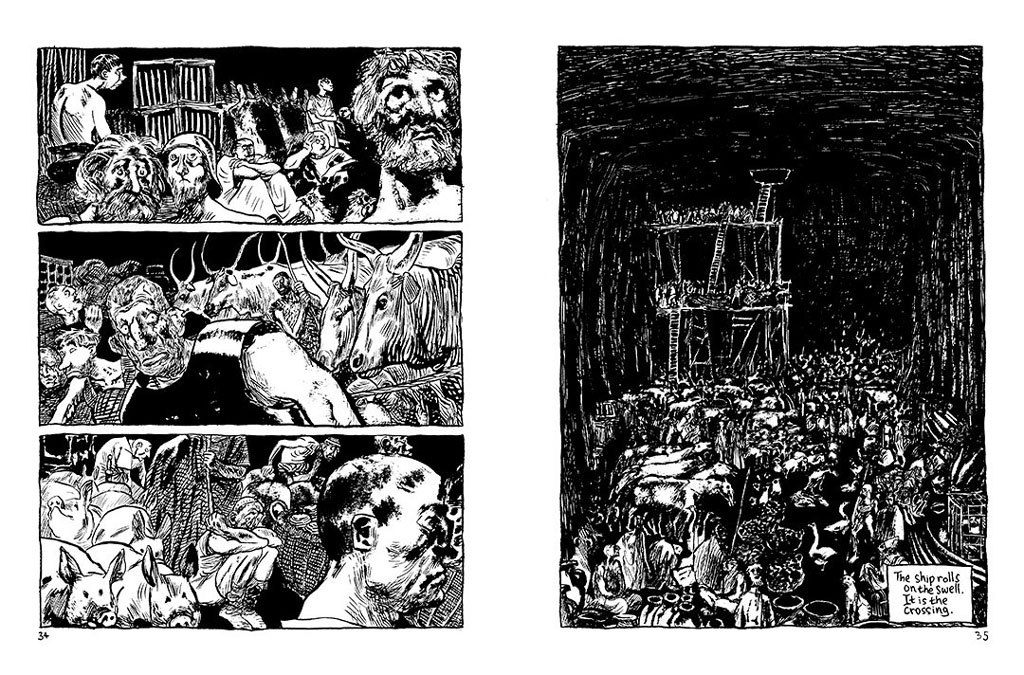 The pleasure of reading Peplum is more visceral than simply encountering a commentary on earlier work. Blutch is a master craftsman of powerful images, and every line of impressive mark making conveys emotion and terror. Much has been said about Blutch’s extraordinary skill in depicting gestural movement and expression, but I was particularly struck by the stark compositions in this book. A favorite image of mine is on page 35, where he depicts the overcrowded hold of a merchant ship using smeary, scratchy whites on a dark background to evoke paranoia and stench; this deathly image  would fit in with some of Goya’s scarier prints.

In the midst of the high concept energy and artistry of Peplum, Enclopius’s futile search for love and meaning is deeply moving and genuine, the final pages legitimately heartbreaking. For lovers of comics, Peplum is an essential, vital work, and it is also a must-read for anyone with an interest in modern interpretations of antiquity.