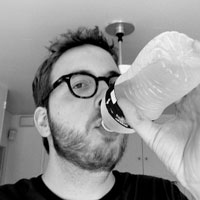 Eric Andrew Newman lives in Los Angeles and is from the Chicago area. He works as an archivist for a nonprofit foundation by day and as a writer of flash fiction by night. He has previously been named as a finalist for the Robert J. DeMott Short Prose Contest and Howard Frank Mosher Short Fiction Prize. His work has appeared or is forthcoming in Exposition Review, Gargoyle, Heavy Feather Review, Necessary Fiction, New Madrid, and Quarter After Eight. 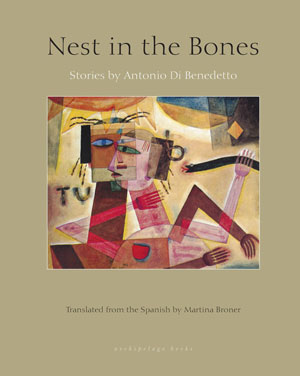 March 12, 2018
NEST IN THE BONES: STORIES by Antonio Di Benedetto translated by Martina Broner Archipelago Books, 275 pages reviewed by Eric Andrew Newman It would have been easy for the Argentinian writer Antonio Di Benedetto’s works to have slipped through the cracks of the world literary canon, as he didn’t belong to any of the three major movements of Latin American literature, the pre-boom of Borges, the boom of Cortazar, or the post-boom of Roberto Bolaño. The Spanish newspaper El Pais has said that Di Benedetto might as well have created his own anti-boom. Shunning the bombastic style of the boom generation, Di Benedetto employs a dry minimalism that underlines the regional foundation of the text. All these well-known literary men greatly admired Di Benedetto’s works. Yet he never achieved their level of success. It took over 60 years for Di Benedetto’s first novel, Zama, which was published in Spanish in 1956, to make its debut in English language translation in 2016. This was Di Benedetto’s first book to be translated into English, even though he had been translated into several other languages, including German, French and Italian, decades before. Di Benedetto’s first book to be published in Spanish was ...
Read the full text 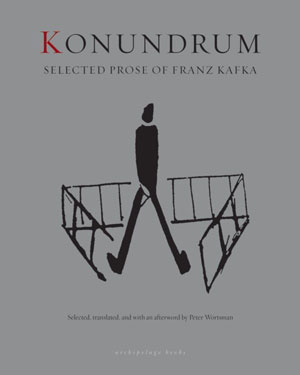 October 19, 2017
KONUNDRUM: SELECTED PROSE OF FRANZ KAFKA by Franz Kafka translated by Peter Wortsman Archipelago Books, 384 pages reviewed by Eric Andrew Newman With the centenary of Franz Kafka’s first three major publications having passed just a few years ago, a plethora of new translations of Kafka’s stories have recently been released. Among them is Konundrum: Selected Prose of Franz Kafka, with works chosen and translated by Peter Wortsman, a writer known for his own micro fiction. Wortsman’s selection of what he considers to be the very best of Kafka’s short prose, whether it’s a story, a letter, a journal entry, a parable, or an aphorism distinguishes Konundrum from the other new translations. This approach contrasts with the single book-length work of Susan Bernofsky’s new translation of “The Metamorphosis” and Michael Hofmann’s new translation of all of Kafka’s unpublished stories in Investigations of a Dog. In the acknowledgements, Wortsman states that his only criterion for inclusion in the book is the ability of a piece to amaze him. In this way, his selections are more personal than a collection of Kafka’s most important works, or works that were published while he was alive, or works that went unpublished in his lifetime ...
Read the full text