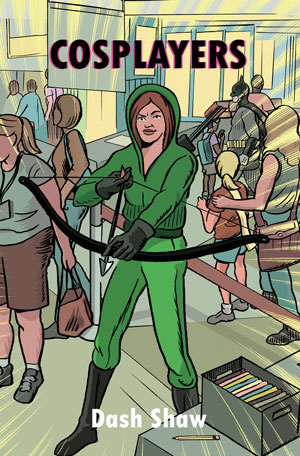 Throughout the pages of Cosplayers, the new book by noted cartoonist Dash Shaw, the narrative presents a series of illustrations of the titular subject: people dressed in costumes based on favorite characters from popular fandom—comics, television, video games, all the things that we like to call “geek culture.” Set against increasingly baroque pop-art patterns, Shaw’s cosplayers will be immediately recognizable to anyone who has ever perused photos of a comic convention—dynamic figures from popular culture evoked by the mundane reality of fans in uncomfortable outfits under the harsh lighting of the convention floor.

However, Shaw’s illustrations flatten the distance between reality and fantasy, using simple, thick outlines and bright colors which blur the distinction of costume and persona. In one of the stories, a character states that she loves “that cosplayers don’t look like their characters. [She] love[s] it that their costumes and bodies are slightly ‘wrong’ or ‘off-model.’” Cosplayers is a book about that fascination, a space where idealized images are corrupted by banal reality and normal people aspire to the greatness of symbols.

Subtitled “Perfect Collection” in a cheeky nod to anime box sets, Cosplayers is a collection of short stories about two young women, Annie and Verti, who make cosplay videos for YouTube in their spare time. Their stories chart experiences that should be familiar to anyone who has grown up adjacent to a nerd subculture, at times painfully so, as in the longest story in the collection depicting a weekend at an anime con. The story functions as a microcosm of the desires and anxieties of nerds and obsessives. While teenage girls and young women struggle to succeed in a blatantly sexist competition, their male counterparts grapple with emotional isolation and young lust. Meanwhile, the older “expert” fan, hoping to be taken seriously as a scholar, is undermined by the same familiar social misanthropy. 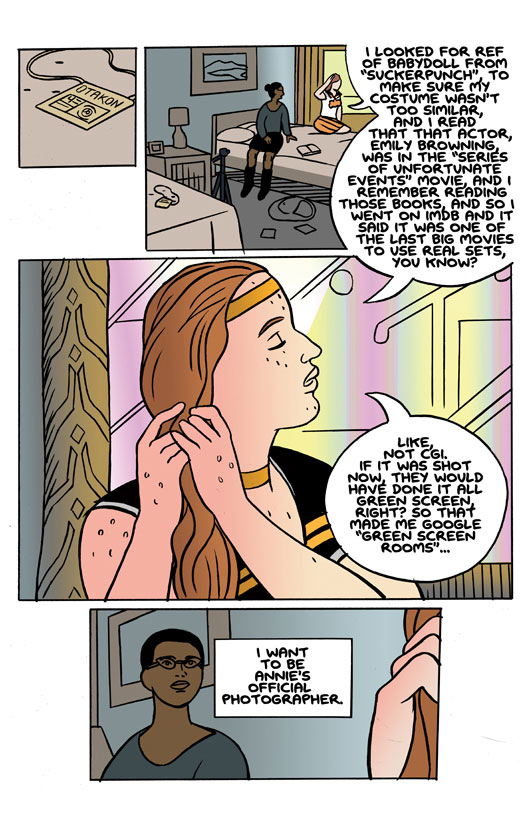 A deft humorist, Shaw has a knack for timing and observation reminiscent of Daniel Clowes, although his dialogue is more naturalistic than Clowes’s heavily verbal narration. The people in Cosplayers will remind many readers of situations they have been in and people they have known, depicted empathetically yet unflinchingly in all their awkward glory.

In one touching flight of fancy, a comic book that has just been cut to shreds for a collage speaks to the reader, proclaiming that it always “wanted to be destroyed and reborn.” The Cosplayers collection itself can be seen as a sort of collage, a number of the stories heavily redrawn from an earlier serialization—in particular, the first story, which now features a few panels cut and pasted from shojo manga and Chinese kung fu comics.

On their own, these simpler stories seemed like a departure from Shaw’s high concept, visually experimental works such as BodyWorld and New School, but Shaw has achieved a new level of literary depth in these smaller, more focused stories, and has created striking images through the use of digital patterns and washes of color. Cosplayers reminds you how good a comic can be, telling human, emotionally resonant stories through powerful pictures.